The shock collar is ordered! My heart is racing with both adrenalin and a little bit of anger thrown in. My bloody dog, that I love incredibly has finally pushed me beyond the limits. And other people’s dogs have instigated it. What am I talking about? So I leave the house this afternoon ready to go and pick Ally up from the bus with Luna as I no longer take her on my morning or afternoon walks with Maddy because too many people let their dogs off leash and I am not ok with it. Especially when your dog can be aggressive. There are too many kids and too much action. Your dog should always be on a leash unless it is completely non-aggressive and completely trained. My dog is completely non-aggressive but she’s not well trained. In fact, she’s a little shit. So, today, this lovely golden retriever that is obsessed with Luna as it is, is off his leash as we walk out of the house and his owner (before knowing we were coming around the corner) throws a ball in our direction (right down the middle of the street mind you). Well the dog isn’t interested in the ball anymore once he sees Luna and he comes pounding down to us and jumps all over Luna, well she jumps all over back at him because she is not trained and she loves everyone and she’s a little so and so, and next thing you know she has twisted off her collar and is running full pelt away from me with this other dog, I am running down the street getting crankier and crankier by the second because I know my dog isn’t going to listen and she completely surprised me by getting loose. Eventually, she came back, the street was full of people, I very loudly said every dog should be on a leash and walked back to the house. Luna is now grounded and I am furiously typing away because I am still cranky. I know we don’t have a park, I know that lady and her husband both walk their dog, and their dog doesn’t listen either, it is a busy street and dogs get hit by cars and my dog is one giant ball of craziness and now she is getting a shock collar. Done. The issues I’ve had with dogs since we’ve moved here is ridiculous! What happens to Americans when they move overseas with their dogs? Why would you feel the need to just let your dog run through the neighbourhood as a free for all? I guess I wouldn’t be so cranky had we not had, not one, but two, run-ins with the other lady and her dog. For some reason she just thinks her dog can run around free, her dog started growling at Luna and getting ready to attack whilst there were kids around. I’ve been attacked by a dog, I freak out at dogs growlIng and getting ready to fight. The only thing that saved my wrist was my metal watch that this dog who attacked me many years ago, broke when he tried to bite me. He still drew blood but he came away with my watch in his mouth rather than my wrist. I have a real fear of aggressive dogs. I just don’t like dogs running around free when there are kids the dog doesn’t know also running around. Dogs are animals, if a kid does something to a dog, the dog is going to bite them, as it should, because that’s the only instinct the dog has. And kids can be animals too. Owners should always be aware of their dogs and their dogs’ needs. Just as parents should always be aware of their kids and their kids’ needs. Sometimes we can’t do it, like today, but most of the time, we can. Right, rant over. And here I am doing something I never thought I would do, in fact, I was downright offended when a friend suggested to me I should get one for Luna, but she is right. I’ve done everything to try to train this dog and she is not listening and I will not have her doing that again, so shock collar it is.

So that’s how my afternoon started, but my morning started with saying au revoir to my girls then coming back and starting on ‘Plyometric Cardio Circuit’ and seriously going OMG! I thought I was doing ok, I remember why I love T 25! That reason; because it’s 25 minutes plus a 3 minute cool down. This; holy wow! This is intense! I forgot how intense it was! I couldn’t even complete the third drill, I think that’s what he called it when you do the basket ball drills, the level one drill, the ski (?) drills and the up/down drills (where you’re down in plank and you bring your feet up together and have to jump up). Anyway, by the time round three came around, I was done! I managed to do the cool down exercises, but man, I was both shocked at how many exercises there were and shocked at how tired/exhausted I was! It was intense to say the least. Tomorrow, I have a big day again. I have to go and see the school, because today my Korean American realtor/real estate agent, came over and read through all the paperwork and is trying to get some questions answered on our behalf. We don’t think Hunter’s should go on the field trip on Friday. Just because the bus drivers here are well beyond crazy, in fact, they are the craziest! 2 hours on a bus to Seoul, by himself, with a crazy bus driver? No, it’s not going to work out. I know he’s not actually really by himself but he’s three and with lots of people who don’t speak the same language and it’s his first week of kindergarten, no, it’s just not going to work out at all.
After all the drama of the dogs, I was finally able to take a few minutes and get my painting finished. Not sure if I want a tree in the right hand corner or if I like it as simplistic as it is. Either way, I like it. I’ve given you two different perspectives of it depending upon the light you view it under and honestly, neither of them really show the colors as I see them. Anyway, I would love to know what you think. Here’s the other version: 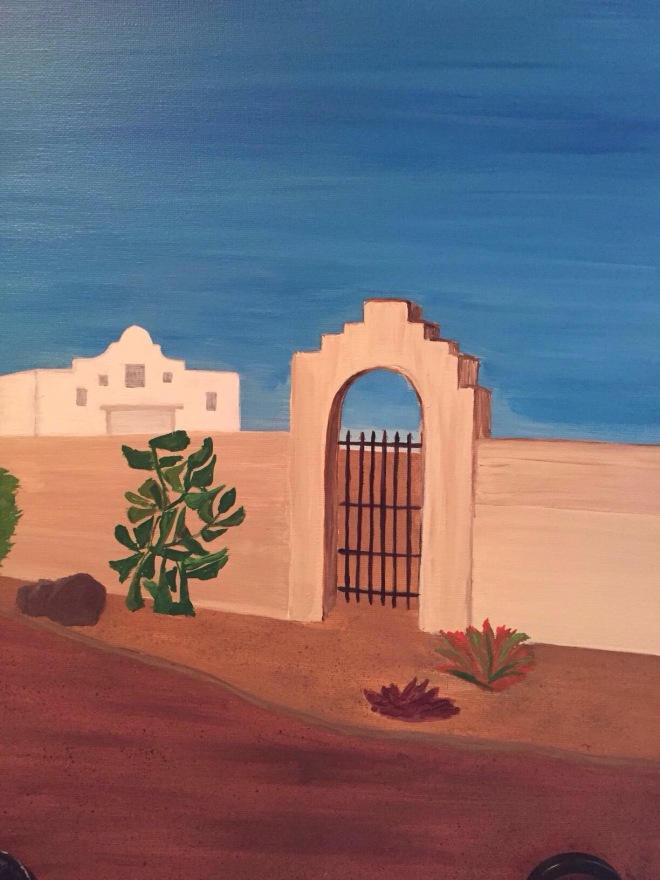 As far as Rodan and Fields, my skin is feeling great, I’ve just ordered the Reverse regimen to do as my next challenge. Unfortunately the MACRO E has sold out and is gone. As are all accessories right now, but they promise to bring more back (accessories of course), yes please. I’m looking forward to revealing to you all just how wonderful my skin looks and how great it feels. Right now though, hubby is at work, it’s nearly midnight, and I am off to catch some beauty sleep. For the last four days I’ve cut out the Benadryl (Kim you will be happy) and used either meditation or melatonin, both of which have meant about 4 hours of sleep per night. Of course hubby is out on this night and tonight’s the night it all catches up with me. So good night, may you find happiness in the smallest things no matter where you are!

As a lover of so many things, I relish in sharing the diversity of my interests including, but definitely not limited to: writing about whatever catches my attention in the moment, sharing my love for travel through photography and stories, DIY projects that can be anything from curtain revamping to kitchen remodeling, painting, narratives about my children and tips and tidbits for anyone traveling through this thing called life. It’s definitely a journey and with three kids, two fur babies and being married to a military man, I always seem to find the crazy! View all posts by Aussie Mum’s Adventures