It’s been a few days now since I last wrote a blog and things have been a little all over the place. The local police called me to ensure there were no injuries in my car as this guy is obviously still insisting that he is injured, even though it was such a minor accident for his truck anyway, having no damage whatsoever, not so minor for my car that hit the corner of his truck bed, that was literally made of steel, yet we have no injuries and he is saying he was injured. I don’t think so! I am just hoping he was caught on camera unloading somewhat heavy items from the back of his truck after the accident. If there is one thing I don’t like it is people who try to to take advantage of the system and of situations. I had three children all under the age of 5 in my car, all in the back where the impact was, and they are all just fine. Seriously, just fine and this dude wants to try to sue me? Again, I don’t think so.
Ok, let’s not focus on the negative, there were some positives from this week, the dentist was amazing and has said that he will continue with Ally’s treatment free of charge! Yes, free! Would any dentist in Australia or USA do that? No is the definitive answer. Very happy with that. Also, I finished the first 4 weeks of Insanity. Here are my photos so far (now the first one in the blue actually goes back to the beginning of the whole thing when I started T25, the second one is from 4 weeks ago when I began Insanity and the third is from tonight):

I can see some results. Not as many as I would have liked given how hard and how long I’ve been working out but also given that I haven’t been on a diet as such, I think it definitely shows that working out is helping me get toned. Oh and I’ve lost somewhere between 6-7.5lbs depending upon the time of day I weigh myself and the day of the week of course 😜 (who knew scales could be so bloody temperamental??).
It has been a somewhat subdued week, I guess. Hunter went back to school on Thursday and Friday, but Thursday I ran around and did errands, we did get a new (old) car finally. It’s something from 2002. It was cheap. It runs well & has AC and heated seats and a heater of course. All the basics and it means some independence for me, although given how shitty last Monday went, I’m not too keen on driving just yet. It’s weird, I have always been a reasonably confident driver yet this accident has thrown me for a six.
Friday was spent doing odds and ends at home, Maddy had a half day for some reason, so I couldn’t go get the Lipolysis shots either as I didn’t want to traumatize her, but she helped me so much around the house and got to play and hang out with her friends so it was a really nice day for the most part. We did happen to go to the grocery store and witness a man collapse and gash his head quite severely on his way down. The whole thing was all a little overwhelming with the ambulance getting called and this man literally out cold. It was obviously quite traumatic for her as she didn’t want to go back to the commissary on Saturday (I forgot to get milk) until I reassured her he was ok and that it wasn’t going to happen again whilst we were there. How do I know he’s ok? Well, we had some friends come over for dinner and drinks on Friday night and one of them happened to work with this guy, so when I started telling the story, she chimed in with how she had been the first person they called from the hospital because she was the last to speak with him on his phone. It really is a small community over here and I’m finding this out more and more on a daily basis.
Saturday morning, we decided to purchase the entire collection of Star Wars movies with copious amounts of junk food (ok, maybe not copious but certainly more than we would normally ever consume in a week, let alone a weekend) and stay in for the weekend and have a Star Wars marathon. I had already worked out Saturday morning so I wasn’t feeling guilty about not doing too much for the rest of the day and the kids seemed to be onboard (until their friends came door knocking wanting to play with them outside). It ended up being hubby and I who really watched the movies with children grazing on junk food and watching bits and pieces then wanting all the blanks filled in because they were somewhat lost. We did make the ‘best parents ever’ stigma for a short time, given there were no set meals over the weekend and food consisted of very few ‘healthy’ things! Honestly, you may think I’m the worst, but every now and again one just has to go with the flow and let your kids just eat crap. They stayed up late interspersing their time throughout Saturday and Sunday with playing outside on their bikes and watching the movies with us. On Sunday afternoon we all went for another family bike ride and it was so enjoyable. This time Hunter didn’t complain at all and his little legs kept pedaling the entire time. It was truly fun, even when it started to rain, there was no complaining from anyone. The rain gave us a good excuse to watch one more Star Wars movie (yes, we made it through the first 5 in order, throughout the weekend). It was just a nice, low-key weekend, with no need to be anywhere at a particular time and no one demanding our attention outside of our family.

Monday (today) has already been successful. I am now on the recovery week of Insanity, which means doing Core Cardio and Balance every day, starting today. And it felt good. I am still trying to kick this nasal, sinus, chest thingy I’ve got going on but I’m now guessing it’s from the yellow dust coming in from China. From what everyone has told me, it sticks with you for a while until you get used to it. Shit! If I wanted to deal with crap coming into my lungs killing me, I would have kept smoking. This is ridiculous. And poor Ally just cannot get rid of her cough! I’m thinking I will definitely have to take her to make sure she is not asthmatic or suffering from bronchitis or who knows what! This place is not agreeing with her lungs either. She is the worst of us all. One of her teachers actually made me so angry last week. Ally is always coughing, always blowing her nose, it is literally like she is allergic to this place, she gets into coughing fits and almost throws up at times. I have her doing a nasal rinse daily and we make sure she spits out all of the yucky stuff when she’s home, but the poor kid just doesn’t seem to be getting better. Back to this teacher. Ally came into her class and started coughing, the teacher stopped talking until Ally was done (as she apparently does when anyone makes any noise in her classroom that she hasn’t approved of). Then Ally’s nose started running and she had to use the roll of toilet paper this teacher had in her classroom for just such occasions. I can’t remember exactly what she said but she basically singled Ally out and ridiculed her then got mad at her for using too much of this roll of toilet paper. On top of that, Ally’s voice was a tad croaky last week because she has had this thing going on for so long, this teacher then made fun of her because she couldn’t reach the notes she had to reach in the class (it was choir class). Ally came home devastated. I was furious! I thought and thought about the best way to react to this. Ally didn’t want me to make a big scene and she didn’t want this teacher to pick on her further, and I completely understood where she was coming from. I know sometimes teachers will take it out further on the children if the parent intervenes, especially those teachers who don’t offer a nurturing environment to their pupils. That was the last thing our daughter needed in her life right now. So, I didn’t do anything until after I had calmed down immensely. When hubby got home, I asked Ally to tell him about it so I could gauge his reaction to the whole thing and was surprised at how angry it made him too. I told him my idea and as always he suggested I wait until I was calm to do it. Now a part of me would have liked to storm in there and grab this woman and shake her a bit until she came to her senses and stopped being such a bitch, but the more practical, sensible side of me knew that wasn’t anyway to show my child how to resolve conflict, instead I wrote her a letter and gave her a new roll of toilet paper. And yes, the toilet paper was my cheap shot, but at least this way, Ally can use it as much as she likes and this woman can never make her feel bad about it.

She never gave Ally a reaction, but she hasn’t picked on her again, so I’ll take it as a win for my little (big) girl who needs all the wins she can get right now given her health and her friendship situation. More on that another day.
Back to today, I went with my friend Rebecca back to see our favourite dermatologist spouse (again, hoping she’s actually a nurse) and to get our Lipolysis shots. This time, I actually took a photo of her sticking a shot into my belly. So weird. She and her husband only realized today that I’m actually Australian, even though I told them the first time I met them. Anyway, they were both excited today because their sons (yes, there are 2 of them) both live and study in Adelaide, Australia, and they have both been there. This was followed with, “it’s pretty, but it’s too hot and too dry.” I felt like saying in return that I could completely understand their distaste as this place is too cold and too wet, as well as too hot and too humid, (and yes, I do mean wet & humid independently of each other) for my liking. On top of that there’s the yellow dust and the monsoon season. Um, hello! Give me Australia’s weather any day! 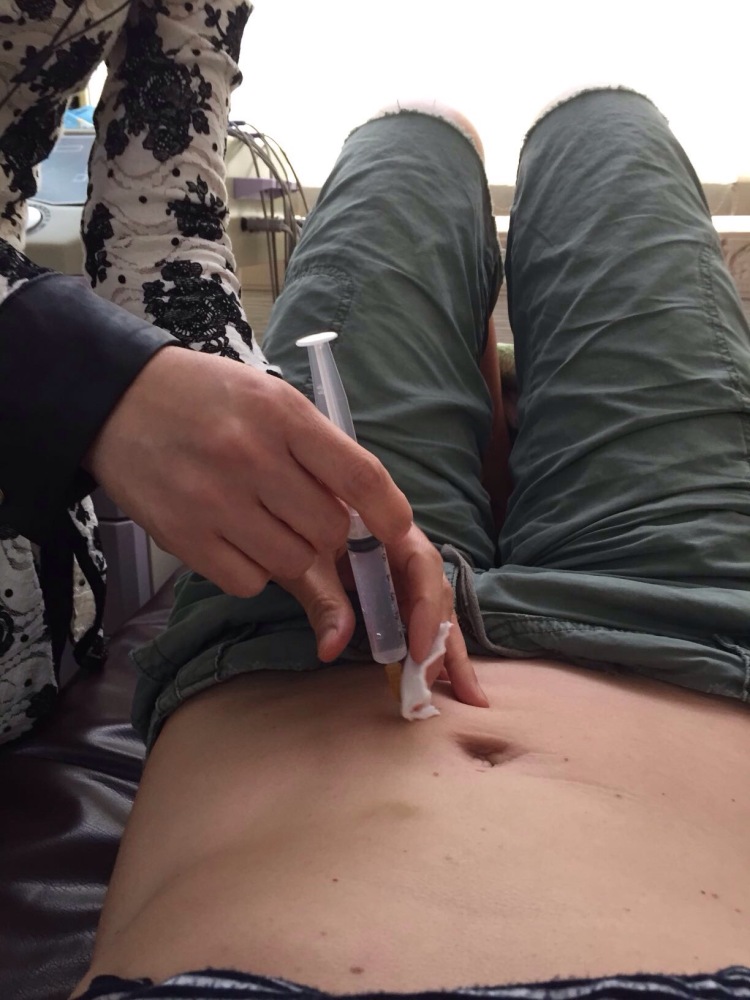 Right, I think I’ve caught you up on all our exciting happenings. The days are definitely getting warmer here in South Korea, we are supposed to hit 33C on Saturday, That’s about my perfect temperature right there, although I think that’s hotter than it ever got whilst we were in Colorado Springs! A sprinkler may be in order though, just in case.
Please feel free to share my blog and invite friends to like my Facebook page: Aussiemumsadventures
If you would like to email me, please do so at: aussiemumsadventures@gmail.com
I hope you have a wonderful day or night, wherever you are in the world. This Aussie Mum plans on doing so! 😊